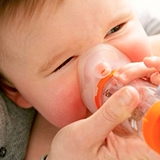 My baby has asthma. What should I do?

Asthma is a chronic disease where during an attack or an episode, causes the airways to become narrowed and blocked with excess mucus. While the effects are temporary, it causes difficulty breathing.

During an asthma attack, the child may begin to have bouts of coughing, wheezing and difficulty breathing. The breathing rate increases and they may have trouble sucking and feeding. Their cries may also sound softer.

In very young babies, doctors may hesitate to diagnose them with asthma because their symptoms may be a result of another problem such as a viral infection. Their airways are small and any swelling or constriction of the airways may result in wheezing and them presenting symptoms similar to that for asthma. Your doctor, however, may still prescribe the child asthma medication because not treating asthma can lead to permanent damage to the lungs. Seek medical help if you are unsure, and especially if you notice that your child is:

There is still no conclusive data explaining the cause of asthma, though there are several known factors that can trigger asthma attacks. While the effects of these triggers differ among individuals, the more common ones include cold air, some viral infections and allergens such as dust mites, mould and pollen.

During an asthma attack, the triggers listed above are inhaled and causes the tissue in the airways to become inflamed. The surrounding muscles also constrict and the mucus that enters the airways narrows the passages even more, thus causing the wheezing and difficulty breathing in the child.

Instead of asthma, some infants that develop the relevant symptoms may have bronchiolitis instead. This condition is usually caused by a virus called respiratory syncytial virus (RSV). While bronchiolitis and asthma may be unrelated conditions that cause wheezing, about 15% of children who have had bronchiolitis are more likely to develop asthma.

Leaving asthma untreated can cause permanent scarring and damage to the lungs. Children suffering from severe chronic asthma may have some growth retardation. Delaying treatment for an acute attack may also result in death.

Though your doctor may not officially diagnose your child with asthma, he may still prescribe asthma medication for your child’s wheezing and breathing problems, to see if they get better. These medications can be given to your baby at home using a nebulizer. This is a machine that converts the medication into a mist that your baby can inhale through a facemask.

You can also reduce the frequency of asthma attacks be reducing your child’s exposure to their triggers. Keep your house as dust-free as possible and try not to keep a pet at home. Ensure that your child is not exposed to cigarette smoke as well.