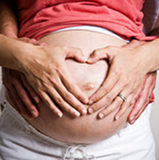 How common are miscarriages? What are the warning signs?

Being pregnant is a joyous time. Unfortunately, with every pregnancy, there is a possibility that a miscarriage might occur. Miscarriages can occur anytime in the first 20 weeks of pregnancy. An early miscarriage takes place in the first 12 to 14 weeks. It is more common than a late miscarriage.

About 15 – 20% of known pregnancies end in miscarriage. However, the actual percentage is probably much higher as many miscarriages occur so early in pregnancy that a woman doesn’t even know she is pregnant.

Although surprisingly common, miscarriages can be difficult to deal with, often leaving a woman feeling angry and deeply sad.

Signs of a miscarriage

If you experience one of these symptoms, do not jump to the worst conclusions. Oftentimes, it turns out to be nothing. Call your doctor to ask for an ultrasound or a pelvic exam to have it checked out. In the meantime, stay calm.

Possible causes for a miscarriage

A chromosomal abnormality is the most common cause for a miscarriage, and usually for an early miscarriage. A baby requires 23 chromosomes from the mother and 23 from the father. Chromosomes carry genetic information. An abnormality could arise because there is more or less than 23 from one or both parents, or there is a change in the structure of one or more of the chromosome(s).

Steps to prevent a miscarriage

As most miscarriages happen because of chromosomal abnormalities, there isn’t much you can do to prevent these. However, you should certainly try to create the best conditions for your baby with good habits like keeping to a balanced diet, getting some exercise, and not smoking or drinking.

If you are having a high-risk pregnancy, it means that you are also at higher risk of having a miscarriage. Do follow your doctor’s instructions precisely to ensure that you have a smooth pregnancy. It would also help if you think positively, so that you do not let stress affect your pregnancy.

Some pregnant mothers find that a fetal doppler helps put their mind at ease when they are concerned about their baby. A fetal doppler is a small device that you can use to hear your baby’s heartbeat from about the 13th week of pregnancy. Of course, if you feel that something is out of the ordinary, do not hesitate to contact your doctor immediately.